In this interview with Jason Wang, you’ll learn how he created a food delivery service with zero budget, how he got into the accelerator program Y Combinator, and how he ended up selling his startup for millions of dollars.

It’s always an uphill battle for any startup, even for a YC-backed entrepreneur like Jason Wang, who went through Y Combinator’s Summer 2011 class with his business MunchOnMe, a daily deals site for food.

After selling that company for a small amount, Jason and his team created Caviar, a delivery service for gourmet restaurants.

What’s even more astonishing about his success is that at one point he only had $10 left in his business bank account.

A few years later, Caviar sold to Square for millions of dollars (reportedly $90 million, but unfortunately Jason was unable to confirm).

We got an awesome interview with Jason, which will provide massive value for our audience.

Here are some highlights from the interview.

I first met Jason in the Summer of 2012 when I was interviewing for the Y Combinator program and asked him for help. At the time, Jason was doing MunchOnMe, his daily deals site for food.

To get started let’s get an intro about you as an entrepreneur.

What’s your first entrepreneurial experience and how did it go from there?

The first thing I did was Anime websites and I had gotten 30,000 unique visitors per month to my Cardcaptors website. I think I was making $30 a day from ads. A few months later the creators of Cardcaptors emailed me and seized my domain name, so that ended my first business venture quickly.

The next thing I did was an app that scraped data from Craigslist. It was a useful app but then Craigslist sent me a cease and desist.

That’s when I decided to go into my first “big business.” So we looked at the businesses at the time and thought that daily deals was really really hot. Groupon was the fastest growing company of all time, and I realized that most of the deals we really liked from Groupon were the food deals. So we decided to make a daily deals platform focused 100% on food. That’s what started MunchOnMe.

We started by launching on the UC Berkeley campus because students love deals.

When you launched, was this before Y Combinator?

We launched MunchOnMe the day Paul Graham (Creator of Y Combinator) came to Berkeley to speak, telling us to apply to Y Combinator with our idea. We thought it was going to be a game changer for our company. After the launch, we quickly got 3,000 students for our first deal, which was a free taco. We applied to YC that year, the summer of 2011, and made it into the summer batch.

Give us an insider’s perspective on Y Combinator and tell us how they help a company.

They’re an accelerator program that operates in 2 batches per year. It’s weekly dinners where successful founders, CEOs, and investors come in and give a talk. You get initial funding for your company – we got $18,000 for our company. I believe now it’s up to $120,000 per company. At the end of the program, there’s a day called demo day, where you get a lot of exposure to investors. At demo day you get a 3-minute pitch to a room full of investors.

After a year and a half, we realized that the daily deals industry was not profitable for businesses and we decided to move on. It wasn’t a sustainable business for the long term.

Why was it not profitable nor sustainable?

The repeat customers for restaurants who bought a deal was almost non-existent. We also realized that the restaurants we really wanted to work with would never partner up with us. That’s because they didn’t need it. They already had lines (of customers) out the door.

That led us to create my current business, Caviar.

You ended up having MunchOnMe get acquired. Did that help you for your next startup?

We were seeking to get acquired, which is the worst time to get acquired. They took whatever technology we had at the time and gave us some capital to survive before launching our next business. We made it very clear that we weren’t going to stay on with MunchOnMe. That money was just to pay ourselves to survive after being unpaid for a year and a half.

Tell us about the creation of Caviar.

One day we really wanted a sandwich we loved. But we didn’t want to go to the restaurant, which would take an hour in traffic getting there, waiting in line for another hour, and then taking another hour in traffic to come back. We called and asked them for delivery, but of course, they didn’t deliver. So we wanted the food, but we didn’t want to spend 3 hours getting that food.

Looking at services that offered delivery, almost none of them offered delivery service from the really good restaurants that we loved. That’s when we realized we had an opportunity.

How did you survive for a year and a half without money?

It was desperate times. It was either shut down the company in 3 weeks or learn how to survive. We ended up renting half of our place for the full $600, which helped cover our entire monthly rent.

Let’s get back to Caviar. You had 2 competitors. Why did you think Caviar could beat them?

Grubhub & Seamless already work with companies that do delivery. We were unique because we had our own fleet of delivery drivers. This allowed us to work with restaurants that didn’t have a delivery infrastructure.

How did you get everything started? As far as getting restaurants to work with you and getting drivers?

At the beginning we were the delivery drivers. For the first few months, we were doing all the deliveries ourselves. Then we hired people off of Craigslist.

The first account we had was HRD and we sold their Kimchi burrito. We only had one item you could buy on the site at the time and we only operated for 2 hours.

How did you get your first customers?

It was all through friends, referrals, and the YC network. We simply emailed other YC founders (YC founders love helping one another) and asked for help with our new business.

The full video interview is an hour long and contains massive value to help your business. We ask more questions about how Jason got his first customers, how he got acquired, and we learn more tips for getting into Y Combinator. 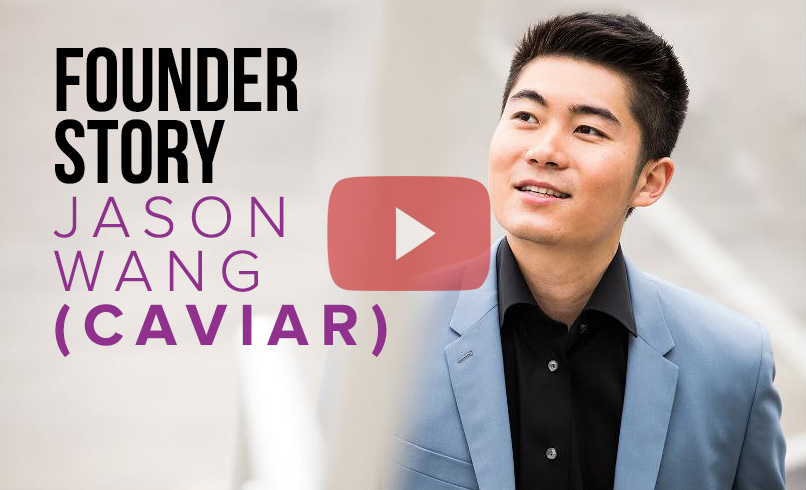